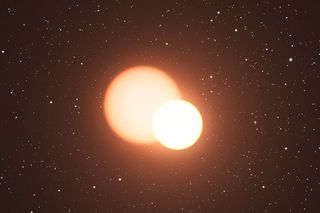 A variable star is, quite simply, a star that changes brightness. A star is considered variable if its apparent magnitude (brightness) is altered in any way from our perspective on Earth. These changes can occur over years or just fractions of a second, and can range from one-thousandth of a magnitude to 20 magnitudes. More than 100,000 variable stars are known and have been catalogued, and thousands more are suspected variables. Our own sun is a variable star; its energy output varies by approximately 0.1 percent, or one-thousandth of its magnitude, over an 11-year solar cycle.

The first modern identified variable star was Omicron Ceti, later renamed Mira. It had been described as a nova in 1596 by David Fabricius. In 1638, Johannes Holwards observed Omicron Ceti pulsating in a regular 11-month cycle. This was an important discovery, as it helped verify that the stars were not eternal and invariable as ancient philosophers such as Aristotle had believed. The discovery of variable stars, along with reports of supernovae, paved the way for development of the science of astronomy.

In the abstract of a talk given to celebrate the 400th anniversary of Mira’s discovery, Dorrit Hoffleit, of Yale University, said, “Within the first century following Fabricius, four Mira-type variables were discovered, and in all cases it has been found that the stars were suspected of being novae long before their “official” discovery in the Western World. Three of the four had been recorded as novae in early Chinese or Korean records.”

In 1669, a second variable star was identified by Geminiano Monanari. It was an eclipsing variable called Algol, although its variability was not explained until more than a hundred years later by John Goodricke in 1784. The third variable star, Chi Cygni, was observed in 1686 and in 1704. Over the next 80 years seven more variable stars were identified.

Since 1850 numerous variable stars have been observed, a process aided by the development of photography. As of 2008, more than 46,000 variable stars in the Milky Way Galaxy were listed in the General Catalogue of Variable Stars.

Characteristics and composition of variable stars

There are a number of reasons for variability. These include changes in star luminosity or in star mass, and obstructions in the amount of light that reaches Earth. Pulsating variables swell and shrink. Eclipsing binaries get dimmer when a companion star moves in front, then brighten as the occulting star moves away. Some of the identified variable stars are actually two very close stars that exchange mass when one takes atmosphere from the other.

Cepheid Variables are very luminous stars, 500 to 300,000 times greater than the sun, with short periods of change that range from 1 to 100 days. They are pulsating variables that expand and shrink dramatically within a short period of time, following a specific pattern. Astronomers can make distance measurements to a Cepheid by measuring the variability of its luminosity, which makes them very valuable to the science.

When it comes to changing astronomers’ perception of the universe, the Cepheid variable V1 played one of the pivotal roles. This important variable star allowed American astronomer Edwin Hubble to determine that the filmy nebula in which it lay was, in fact, another galaxy entirely, demonstrating that the Milky Way did not contain the entire universe.

“V1 is the most important star in the history of cosmology,” astronomer Dave Soderblom of the Space Telescope Science Institute (STScI) in Maryland said in a statement. “It’s a landmark discovery that proved the universe is bigger and chock full of galaxies.”

Cataclysmic Variables (also called Explosive Variables) brighten because of sharp or violent outbursts caused by thermonuclear processes either on the surface or deep inside. These include binary type stars, with two close stars having a mutual effect on mass. Supernovae, Novae, Recurrent Novae and Dwarf Novae are a group of stars that have dramatic or sudden magnitude increases, usually because of a stellar explosion.

Eruptic Variables are stars with eruptions or flaring on the surface or interaction with other interstellar matter. There are quite a number of sub-types in this category, including luminous blue variables, flare stars, supergiants, protostars, and Orion variables. Some eruptic variables are close binary systems.

Rotating Stars are variable stars that show small light changes caused by patches of light spots on their surfaces. They may have bright spots at the magnetic poles. Rotating stars are often binary systems and can be non-spherical or ellipsoidal in shape, which causes brightness changes as they move.

Research on variable stars is extremely important as it gives scientists information on star properties of mass, radius, temperature and luminosity, as well as information on the structure and composition of the star and how it has evolved. Understanding the nature of variable stars requires systematic observation of behavior over many decades. Variable stars are analyzed visually and with photographic, photoelectric and calibrated charge-coupled device (CCD) techniques. Amateur astronomers play an important role in collecting data and submitting observations to the AAVSO International Database.

Within the different categories of variables, some are particularly valuable to astronomy, since their variability can be measured. Research into the Cepheid variables helps determine the age of the universe and has provided information on the distant galaxies. Studies of Mira variables are important to our understanding of our Sun. Supernovae give us insight into how the universe is expanding, while

Cataclysmic variables help in understanding active galaxies and supermassive black holes. Variable stars are a specific field of study in astronomy, providing important information on how and why things change over time. They play a significant role in our understanding of the universe.