Different telescopes traditionally have certain mounts that best suit their application and use. 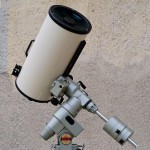 The larger Newtonian telescope is difficult to balance on a tripod and needs a solid structure to minimise vibration and movement. Delicate refractors with long focal lengths also require a steady mount and smooth transition in the movement.

Tripod mounts vary in complexity and simplicity which also determines their ability to track the movement of the stars. A simple fork mount can be horizontally mounted with limited tracking or be angled to allow the single directional path of the earths rotation. An equatorial mount is designed to be polar aligned and  to allow the single axis of movement to follow the celestial objects. In other words the mount is arranged to turn at the same speed as the earth and follow the stars. This does require the angles of the mount to reflect the position the observers is between the equator and the pole of the earth. If you are 32 degrees south then your mount will need to be 32 degrees up from the horizon. If you were standing at the south pole you mount would be 90 degrees from the horizon. Of course this is a very difficult position to observe from if you didn’t freeze whilst trying.

Dobsonian mounts are a simple turn table style design with the telescope pivoting on a centre axis. The simplicity of this mount requires no angular setting or levelling of the footing. The limit of this mount is that it requires the operator to move the scope in two directions at the same time to track the stars. 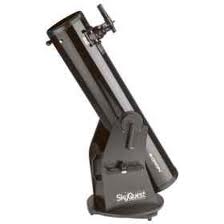 There are similarities between this style of mount and the fork mount. Both work on a turn table base and the scope is pivoted near the centre of the scope. There are kits available that allow the dobsonian mount to be driven by stepper motors and with the aid of software can track stars. 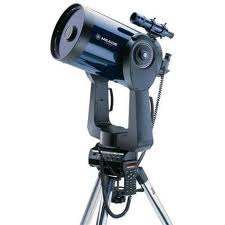 The combination of a Dobsonian mount and a Newtonian telescope provides a very cheap package. With large apertures from 12″ to 18″, a Newtonian telescope comfortably nestles into the cradle of the Dobsonian mount, balanced to make handling and movement of the scope accessible to most observers. The mount can be easily made with the right design providing an enjoyable hobbyist project. 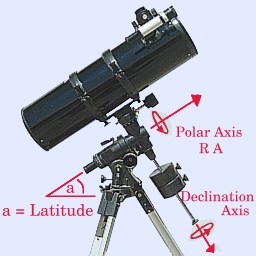 The declination is the measurement in degrees north or south of the equator. Points north of the equator are positive and south are negative, the north celestial pole is +90 and the South celestial pole is—90 degrees. If you were to stand at either pole this point would be directly over head. As you move back towards the equator, the pole moves towards the opposite horizon, i.e., if you move north from the South Pole the point above your head would move towards the south until you reach the equator where that point would be at the horizon (-90 degrees). There fore knowing your latitude allows the declination to be set to point directly at the celestial pole. 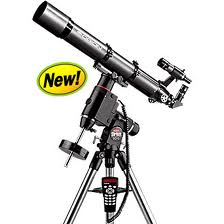 Once the declination is set and the tripod is level, the right ascension axis should align with the equator and rotate in line with the stars. When a stepper motor is attached to the axis as a drive, the telescope win track an object without needing to continually make adjustments. As mentioned above, the introduction of electronic—computerisation, mounts are commonly used with GPS navigation to locate your declination, position, altitude and errors in the tripods level and can not only track objects but find point the telescope at an object, star or planet found in its data base.