A star is an astronomical object consisting of a luminous sphere of plasma held together by its own gravity. 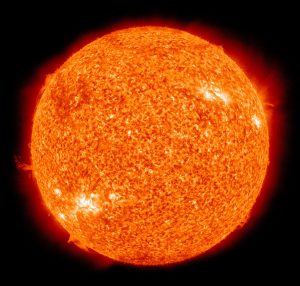 The nearest star to Earth is the Sun. Many other stars are visible to the naked eye from Earth during the night, appearing as a multitude of fixed luminous points in the sky due to their immense distance from Earth. Historically, the most prominent stars were grouped into constellations and asterisms, the brightest of which gained proper names. Astronomers have assembled star catalogues that identify the known stars and provide standardized stellar designations.

hundreds to millions of old stars which are gravitationally bound, while open clusters, more loosely clustered groups of stars, generally contain fewer than a few hundred 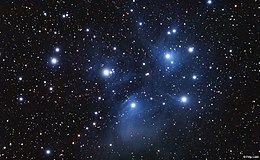 members, and are often very young. Open clusters become disrupted over time by the gravitational influence of giant molecular clouds as they move through the galaxy, but cluster members will continue to move in broadly the same direction through space even though they are no longer gravitationally bound; they are then known as a stellar association.

There are two types of Nebula, bright and dark. Bright nebulas are made up of gas, dust and ice which reflect the light from adjacent stars. 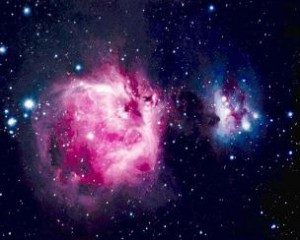 This might be compared to the glowing fog around a street light. When nebula is close to a large star, the intense ultraviolet light ionizes the atoms in the gases causing the cloud to glow. This is called an emission nebula. These nebula are found where stars are forming such as the Great Nebula in Orion (M42) and the Lagoon Nebula (M8).

Photographs of nebulae use filters to produce colour where the filter limits the wavelength of light that reaches the film or capture device. Reflection nebula are a cool blue colour and emission Nebula often glow red. To the human eye observing these in a telescope they only appear to be white as our eye can not detect colour at these very low light levels. Planetary nebula such as the Ring Nebula (M57) and the Dumbbell Nebula (M27) are the remnants of a supernova, a dying star that has created a ring of dust, gas and elements such as silica and iron, enveloping a puffed cloud around its dying form. The Veil Nebula (NGC 6960) and the Crab Nebula (M1) are both supernova remnants.

A Dark Nebula is a cloud made of the same materials as normal nebula but it is so dense that light can not pass through it. These nebula appear to be black patches in the bright sections of the Milky Way or a light background. The Horsehead Nebula (IC 434) and the dark lane in the Lagoon Nebula (M8) are examples of a dark nebula. It is known that new stars form in these clouds through infrared telescope images. 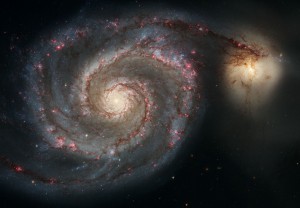 Galaxies are the homes of billions of stars and solar systems, which are held together by gravity. Galaxies come in many different shapes and sizes. The galaxy that our sun resides in is known as the Milky Way due to the bright white cloud that appears to span across our sky at night. Galaxies, like solar systems, tend to be flat and disc shaped although there are variations to this. The Milky Way is a spiral galaxy with our solar system position near the outer rim of the disc. As we look out into the deep regions of the universe, we look edge on through the disc and this is why there appears to be so many stars through the elliptic.

The most common shape of a galaxy is the dwarf elliptical and irregular galaxy with the spiral galaxy being the largest group. There are other shapes such as barred spiral, elliptical and clustered galaxies. These systems vary from 15,000 to 150,000 light years in diameter and contain several hundred billion stars. Not all galaxies are lined up on the same plane as our galaxy and therefore can be observed; edge on, from above or face on and at various angles. 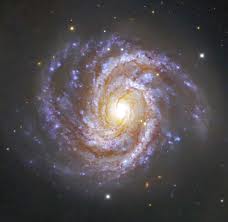 A spiral galaxy such as M100 is face on allowing the spiralling arms to be clearly seen where a similar galaxy that is edge on will look like a fussy ball and a dark streak through the middle as seen with NGC 5128 known as Centaurus A. 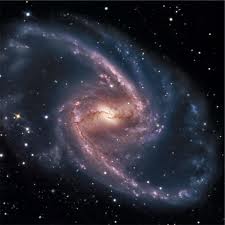 A barred galaxy like NGC136 5 and M95 are spiral galaxies that exhibit a thin line through the middle of a glowing nucleus. This bar or line separates the galaxy and is most likely caused by outlying dust and ice absorbing or reflecting the light behind it. Elliptical galaxies are discs or clusters of stars that are old and dying. Similarly Lenticular galaxies have a central nucleus but no spiral structure. Both these and elliptical galaxies are very old galaxies.