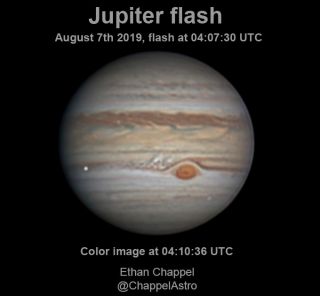 Image of Jupiter processed from images obtained by Ethan Chappel shortly after the impact. An image of the flash produced by the impact has been included at its right location over the colour image.
(Image: © E. Chappel)

The space rock that whacked Jupiter last month has lost its air of mystery. Something slammed into the king of planets on Aug. 7, generating a flash that was spotted by Texas-based amateur astronomer Ethan Chappel. Now, six weeks later, astronomers have put together a sketch of the cosmic assailant. The impactor was likely 39 feet to 52 feet (12 to 16 meters) wide, with a mass of around 408 metric tons (450 tons), according to analyses conducted by Ramanakumar Sankar and Csaba Palotai of the Florida Institute of Technology.

The object’s density was therefore similar to that of stony-iron meteorites, suggesting the impactor was an asteroid rather than a comet. (The most famous Jupiter impact of all time came from a comet, Shoemaker-Levy 9, which smashed into the gas giant in 1994.)

The asteroid broke apart about 50 miles (80 kilometres) above Jupiter’s cloud tops, unleashing the energetic equivalent of 240 kilotons of TNT, Sankar and Palotai found. That’s about half as energetic as the February 2013 airburst over the Russian city of Chelyabinsk, which was caused by a 65-foot-wide (20 m) meteor. (The Chelyabinsk event injured more than 1,200 people; most of them were cut by shards of glass after the airburst’s shock wave broke windows.)

Ricardo Hueso, a researcher at the University of the Basque Country (a school known by the acronym UPV/EHU), also analysed the impact data and came to similar conclusions about the asteroid’s size and mass. The August event was likely the second brightest of the six Jupiter impacts observed since 2010, Hueso said.  “Most of these objects hit Jupiter without being spotted by observers on Earth,” Hueso said in a statement. “However, we now estimate 20-60 similar objects impact with Jupiter each year. Because of Jupiter’s large size and gravitational field, this impact rate is 10,000 times larger than the impact rate of similar objects on Earth.”

The new analyses were facilitated by an open-source software program called DeTeCt, which was designed specifically to identify impacts on Jupiter. DeTeCt was developed by Hueso and French amateur astronomer Marc Delcroix.  Chappel used DeTeCt to analyse the flash; he then contacted Delcroix and Hueso, who reached out to their connections in the amateur astronomy community to see if anyone else had observed the impact.

“The amateur community has been galvanised by this event, and the number of observers and the volume of data being processed is increasing rapidly,” Delcroix said in the same statement. “DeTeCt is a fantastic showcase for pro-am [professional-amateur] collaboration.”  The new results about the Aug. 7 impact were presented Monday (Sept. 16) at a joint meeting of the European Planetary Science Congress and the American Astronomical Society’s Division for Planetary Sciences in Geneva.

Mike Wall’s book about the search for alien life, “Out There” (Grand Central Publishing, 2018; illustrated by Karl Tate), is out now. Follow him on Twitter @michaeldwall.